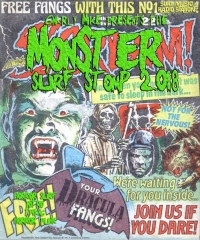 The World's Number 1 #horrorsurf event is back with 13 hours of creepy surf, trash and twang only on www.surfrockradio.com

Attention humans! During the next week our human slaves will be conducting essential maintenance on our playout software. However, for a short time there is expected to be some disruption to scheduled shows, and it is likely that we will terminate the play on demand feature in order to focus on the more interactive "Robotic Request Hour" feature. Ultimately this will enable listeners to discover the latest surf releases on surf rock radio, almost as soon as we get them. If you have sent tracks to us recently, we will try to get them in rotation as soon as possible. Robots rule! Thank you for your co-operation \ooo/

Thanks to all the bands and labels who have contributed to Surf Rock Radio in the last year. Extra special thanks to Willie Mars, Derk Biondi, Chumby Steve, Franky Sands, El Guapo, Bamalam and T.T. Shaker, Jammin James Riley and Noodles for putting shows together.

Extra extra thanks to listeners and everyone who has donated to help support Surf Rock Radio in 2017.  Your donations really do make a difference, and that brings me on to make an announcement.

In 2018 things are going to change.  In fact things are going to get a whole lot better.  Some of you may be aware that over the last few months I have had difficulty keeping up with site updates, and it's taken a bit longer than normal to add tracks to playlists, and post the charts each week.  Some shows have been stuck on the server longer than they should have.  Others of you might not know that I have extreme damage to the nerve endings in my fingertips and I can only use a computer for a few hours each day.  This leads me to one conclusion.  We need to use technology in a much smarter way to operate the station.

In early January, Surf Rock Radio will be entirely run from our servers in the cloud, and in addition to that the playout software that manages the shows and playlists will also be migrated to our own software.  This software is entirely owned by our technology partners GECKONET LTD and SHARAWAJI RECORDS.  Things are going to get rough and repetitive for a few weeks as we rebuild the playlists on our own platform.

Surf Rock Radio has been nominated for the Best Online Radio Station. Go to this link and select Listener/Fan and then enter Surf Rock Radio. You will need to add www.surfrockradio.com as the link to the station. We have until 2359 GMT on 20th August to vote.
http://www.theonlineradioawards.com
LIKE AND SHARE #surfrock #surfmusic #surfrockradio